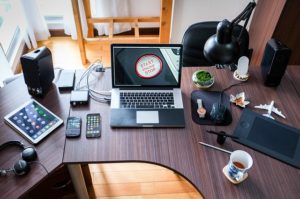 When you stop and think about it, it’s truly extraordinary to consider how far we have come in terms of commercial lighting technology, and not just in CITY. The widespread switch to energy efficient LED light bulbs has snowballed into movement, to the great pleasure of environmentalists and accountants alike. But is reality, LED lighting is just the first step.

Here is out list of the top 5 places in the office building, commercial warehouse, or retail space that could use an immediate technological upgrade to dynamic lighting controls.

If there is one place in the office building that needs to be properly lit, it is the place where all of the work is actually getting done.  By designing your lighting system into strategic clusters, it can be possible to turn some sections off while leaving others on, making it possible for different people to work different schedules. In addition, by separating the workstation lighting from corridor lighting, it is possible to leave a limited selection of lights illuminated overnight for security purposes.

As you can imagine, the places in your building that require the least amount of artificial light are the areas next to the windows. Many office buildings are designed with entire walls of windows, and these areas have traditionally been the most valuable office space. Today, however, more and more forward-thinking companies are taking advantage of their health-boosting natural light by designating it for workspaces and desk clusters, while also installing daylight sensors that will prevent too much artificial light from being wasted.

Occupancy sensors can be a great way to reduce the energy load on areas of the building that are not always in use. Some hallways and corridors might not see much traffic at all, which is why having motion-based sensors can start saving on the energy bill right away. There is a special consideration with hallways and corridors, however: it is important to make sure that the sensors are properly calibrated so the corridor lights are illuminating before the person reaches them.

In a perfect world, everyone would simply hit the lights when finished using the restroom, but this is rarely the case. Making it worse is that face that if a restroom light is left on, there is no way to see it from outside. This can lead to tremendous amounts of wasted electricity. Occupancy sensors are an obvious solution to the restroom problem; an affordable PIR sensor can eliminate the issue entirely. And because the operating life of an LED light bulb is unaffected by how many times it is being switched on or off (unlike CFL lighting) you don’t have to worry about how many bathroom trips people are making per day.

Not every room in your building is being occupied at all times, and if it is, then it sounds like a place we wouldn’t want to work. Meeting rooms, conference spaces, and board rooms are all examples of areas that do not require lighting for more than a couple hours a day at max. A blend of daylight sensors, motion sensors, and manual override controls can create an efficient, versatile meeting space that isn’t wasting energy.